White Industries has a headset to fit the majority of common headtube sizes, and finding the right one is just a matter of getting some basic information about your bike and knowing which headset type you need to look at.

So first, let's sort through the types of headsets White Industries makes, and how they can be identified:

External Cup (EC): For many this is the most familiar type of headset, which pressed-in cups that contain the bearings outside of the headtube.  If you've got an older 1 1/8" headtube, this is probably what you'll be looking for.

Zero Stack (ZS): A headset type that has become most common since the introduction of tapered steerer tubes that uses a pressed-in headset cup similar to EC type headsets, but instead of holding the bearing outside of the headtube, the bearing sits down inside of the frame for a lower stack height.  This type of cup is very commonly seen in combination with an EC type lower cup in bikes with tapered headtubes, but can also be found on the lower cup of many bikes.

Intergrated (IS): This type of headset does not have cups that get pressed into the frame, and instead uses bearings that drop directly into the frame onto surfaces that are machined specifically to fit a give type of bearing.  With these fitting your frame is generally relatively easy because you can simply look at the labeled size of the bearing and get the headset that matches.

It's common to have a combination of EC and ZS style cups in a single headset, and to have cups or bearings of different sizes in the same headset, so it's just important to look understand the headtube your bike has and go from there.

A few examples of possible headset and steerer tube combinations and the headsets they would require:

One final consideration is that a given cup size will have a maximum steerer tube diameter, so an EC44 cup can take up to a 1 1/2" steerer tube, but if you want to use a fork with a straight steerer tube in that headset, White Industries makes handy adapter crown races that will step down from the cup's maximum size to a smaller fork crown size. 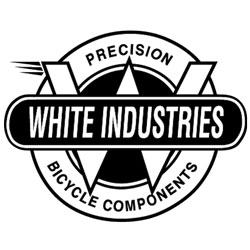